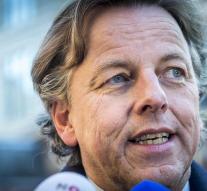 brussels - EU foreign ministers have Sunday discussed the election of Donald Trump to new president of the United States. ' We're all sensible that we talk about the future relations between the EU and the US, there you can not start early enough, '' said development minister Bert Koenders Sunday night after a dinner in Brussels with his European colleagues.

EU foreign policy chief Frederica Mogherini had Ministers invited soon after the US elections last week for an informal meeting to reflect on the ' totally different phase that the United States will discuss with the election of Donald Trump, in particular the foreign policy. '

The initiative was previously at Koenders and the German Minister Frank-Walter Steinmeier. The British minister Boris Johnson broke down.