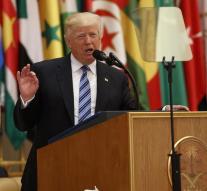 jerusalem - Israeli Prime Minister Benjamin Netanyahu has told his ministers to pay off at the official receipt Monday of US President Donald Trump at Ben-Gurion Airport in Tel Aviv. To the great rage of Netanyahu, a number of ministers were told to leave default.

Sources of the Israeli government had informed Haaretz newspaper that Netanyahu was given air on Sunday morning during a meeting of the coalition parties' heads that there were hardly any ministers at the airport. Netanyahu would have immediately put an end to the meeting and the ministers were obliged to appear at the airport on Monday.

Trump started Friday's first official trip as president. He arrived on Saturday in Saudi Arabia. Monday he leaves for Israel.

The United States announced on Saturday that they will supply weapons of $ 110 billion to Saudi Arabia. This includes 150 Black Hawk helicopters. These are built in Saudi Arabia.

The Israeli Minister of Energy Yuval Steinitz showed Sunday that the weaponry between Saudi Arabia and the US is causing him concern. He said that Saudi Arabia is still a 'hostile country' for Israel, which has not established diplomatic relations.