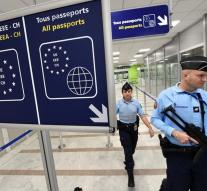 brussels - Possibly there will be a temporary end to the passport-free travel within the zone of the 26 Schengen countries. The EU Ministers of Interior and Justice Friday to discuss these and other measures that countries can take in fighting the influx of refugees. EU president Luxembourg has the options set put in a discussion paper.

According to Article 26 in the Treaty of Schengen border controls should be reintroduced for a maximum of two years in the case of,null, continuing serious deficiencies related to external border control. '' Activating this article gives countries like Germany, Austria and Sweden, where most refugees want to go, the opportunity to maintain their checks. Now it may just six months. Also possible that countries will introduce other than border controls.Europe discusses the Schengen rules, partly to put pressure on Greece. The country knows the control of its borders but does not get order and the registration of hundreds of thousands of refugees who came to the country this year were extremely difficult.UnderstandingHelp the Greeks so far hardly invoked, for example, the European border agency Frontex. Athens refuses still the Frontex teams because a Greek teams must lead according to Greek law. And for taking fingerprints has too few appropriate equipment. Several EU Member States here complain bitterly about the Greeks and have been repeatedly urged to hurry.Diplomats also point out that in Europe actually understanding the problems that Greece has to absorb the massive flow of refugees. The European Commission indicated Thursday that she is working closely with Greece, in order to better the situation quickly under control.Incidentally, the number of available Frontex staff is limited. Although European Member States two months ago promised to provide 775 people with the border agency, is that some still stabbing at 400.
NEW