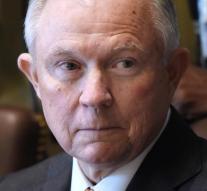 washington - The US Secretary of State Jeff Sessions will appear on Tuesday for the Senate Intelligence Commission. He will answer questions in response to statements made by ex-FBI director James Comey to the committee on Thursday.

The Senate is investigating the possible interference of Russia in the presidential elections last year.

Sessions are questioned about his meetings with Russian ambassador Sergei Kisljak in Washington. Comey also said last week that he has information about why the governor retired earlier in the investigation into Russian interference. That information labeled Comey as something he could not speak 'publicly'.

The commission will also question the minister about his share in Comey's resignation. Sessions would recommend Trump to send Comey the avenue. The Minister of Justice then did not hear anything at all, said Comey.

Sessions, according to his spokeswoman, have been asked for a public session. 'He believes it is important for the American people to hear the truth from his mouth,' said the spokeswoman.