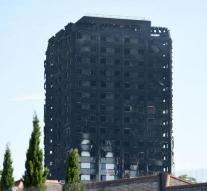 london - Residents of the burned Grenfell Tower, who illegally rented their rooms, are not charged. That has told the British Prime Minister Sajid Javid (Local Authorities) to various British media on Monday.

The tenants must then come up with information about the illegal room rental and who bivaked in the rooms during the fire. Javid makes the call because reports show that there were many tenants who illegally rented their rooms. So far, they were reportedly not very happy to share information with the authorities, for fear of prosecution.

'It's about missing people being identified. That's why I call those who come up with information to come forward without being afraid of being charged, 'said the minister.

Attorney General Jeremy Wright hopes that victims can now be identified faster. 'Every piece of information can be useful. '

The fatal death toll in the Grenfell Tower is currently at 80, but according to the police, the number may still increase.