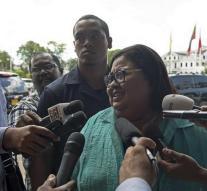 - The court-martial overlaps the Surinamese constitution to his boot. That accusation uttered Minister of Justice and Police Jennifer van Dijk-Silos Thursday. It is evident,, '' the court-martial in December Murder Process on the seat of the Constitutional Court is to sit down when she tried the amnesty law enacted by Parliament in 2012.

According to the minister, the Surinamese law shaken and seriously disturbed the balance between the different powers. This situation is for the government gave rise to the order of the Attorney General of the Constitution through Article 148 to halt the prosecution in criminal proceedings.

The judiciary has recently also in other cases made mistakes, says Van Dijk-Silos.,, The violation of the constitution by the court martial was not an incident, but the climax. '' They warned that,, we can expect excesses and riots. '


The Minister announced that in the near future many new laws will be made to retrieve the Dutch influences from the legal system. Van Dijk-Silos said to be annoyed by Dutch interference in Suriname.,, From 1982 (the year of the December murders, ed.) We have external powers interfere with us. 34 years Netherlands actively interferes with the land. But do not recognize the election results in 2010, '' said an indignant minister.