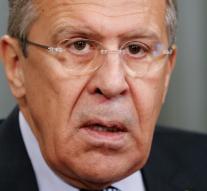 moscow - Russian Foreign Minister Sergei Lavrov has canceled his visit to Turkey. Lavrov Wednesday would travel to Ankara to discuss the conflict in Syria, but sees there from Turkey Tuesday after a Russian fighter shot down.

Lavrov called Russians in Turkey to avoid for the time being. The danger of attacks in the country, according to him as big as in Egypt.

Turkish resorts are a popular holiday destination among many Russians.