Home / World / Minister intervenes in the asylum affair in Bremen 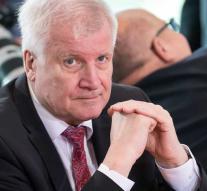 berlin - The office of the German migration service in Bremen (Bamf) is not allowed to take any decisions about asylum applications for the time being. The German Minister of the Interior Horst Seehofer has determined that. He personally intervened in response to a scandal surrounding granting residence permits that recently came to light.

The migration service's own research showed that at least 1,200 people received asylum between 2013 and 2016 without being entitled to it. Justice has started investigations against the then chief of the office and other suspects. They are suspected, among other things, of having let themselves be bribed.

'Confidence in the quality of the asylum procedures and the integrity of the arrival center in Bremen has been seriously damaged,' observes Seehofer.