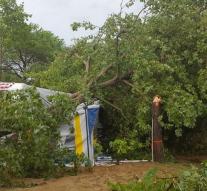 potsdam - Minister Diana Golze, 42, of the German state of Brandenburg hit a campsite in northern Italy because of the emergence of a tree during her emergency.

She is operated at the hospital and does it well, according to her spokeswoman, Friday. Further details are not provided. Golze is Minister of Health and Employment in Brandenburg.

Italy was hit on Thursday by heavy winds, hailstorms and thunderstorms. In the Italian newspaper Corriere della Sera, a holiday celebrity fireman was quoted, who provided a first aid in a rescue operation on a campsite in Jesolo. In addition, he and a doctor took a 42-year-old woman under a tree, laid her on a surfboard and brought her to a ready-made rescue helicopter. It is so far unclear whether it was about the minister.