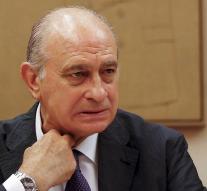 - Four days before the parliamentary elections in Spain is one of the most important ministers of the conservative People's Party (PP) got caught in an eavesdropping scandal. A left-wing news site has audio recordings brought out which would be to hear how Interior Minister Jorge Fernández Díaz discusses a plan to blacken Catalan politicians, Spanish media report.

Virtually the entire opposition demands the resignation of the minister. Prime Minister Mariano Rajoy and Fernandez himself musing not about that. They dismiss the revelations as an attempt to bring the PP in embarrassment on the eve of the elections to bring the party as loss of votes.

Fernández explained according to the news Público with the head of the Spanish anti-corruption service or who could not open an investigation against some prominent advocates of independence for Catalonia. A few weeks later, Catalonia would speak in a referendum on independence. The PP is adamantly against the secession of Catalonia.