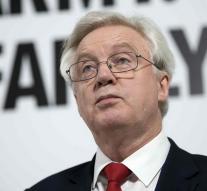 brussels - According to British Prime Minister David Davis, who is in charge of Prime Minister Theresa May's headquarters for brexit affairs, the European Commission 'chooses' the British people. That he said to the BBC.

What Davis is particularly opposed to is that the EU would like to present the British a 'brexit bill' that could reach up to 100 billion euros. 'When that Wednesday morning leaked, a line was exceeded,' says Davis.

Michel Barnier, the EU's main negotiator, said earlier this week that negotiations will be negotiated with London on a financial arrangement that meets the joint commitments that have been entered into. The Frenchman did not wonder how much the brexit costs the British.