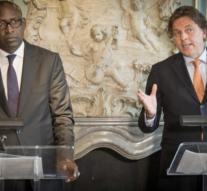 the hague/bamako - Malian Foreign Minister Abdoulaye Diop speaks to his country has signed an agreement with the European Union on the return of Malian migrants. In the VPRO radio program Foreign Office says Friday, 'We were surprised to hear that there would be an agreement was signed. There is a problem, because that has not happened at all. There have been a discussion, but we can not say there was signed a specific agreement, 'said Diop.

His Dutch colleague Bert Koenders announced Sunday that he had signed an agreement with Mali on behalf of the EU. The two ministries also left issued a joint statement.

'On the part of the Government of Mali, we reject this statement completely,' said Diop. 'Because there is no signed agreement on the return of migrants. The statement does not reflect the issues discussed. 'He calls it important that the Netherlands corrects the message.