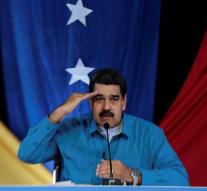 caracas - Venezuelan President Nicolas Maduro has once again raised the minimum wages, this time sixty percent, according to CNN Money. Due to high inflation, food and medicine are too expensive for many citizens.

Venezuela has huge oil reserves but is in a deep crisis. For weeks, residents have protested against government policy. The opposition demands free elections, the release of political prisoners, respect for parliament and better care of the citizens, with food and medicine.