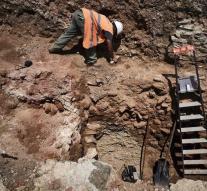 vienne - A full Roman-Roman district was discovered on a construction site in the French city of Vienne. The archaeologists believe that in the year 100 the inhabitants fled away by fire and thereby left their furniture. Many objects have remained in good condition, and archaeologists speak of a 'mini-pumpkin'.

The French Ministry of Culture calls the well-preserved luxury houses and public buildings, on an area of ​​about 7000 square meters, an 'exceptional find'. The site includes a fountain and parts of houses. All richly decorated with images of Roman gods, marble tiles and mosaics.

The mosaics have been taken for restoration and are expected to be exhibited at the Gallo-Roman Museum in Vienne in 2019. The French city of Vienne, about 30 kilometers south of Lyon, is famous for the Roman temple and the Roman theater where the annual jazz festival 'Jazz à Vienne' is held.