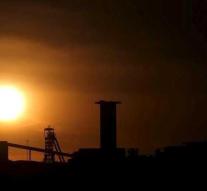 johannesburg - Of the thirteen miners who were trapped in a mine in South Africa after a collapse, four died.

They belonged to a group of ten who were brought upstairs but later succumbed to their injuries. The other six are in the hospital.

By a light quake, a corridor crashed into the Masakhane gold mine west of Johannesburg on Thursday. A miner who is still stuck is located. Two others are missing.

South Africa has the deepest mines in the world and many mines are therefore considered dangerous by geologists. In February, severe weather put down the power supply of the Beatrix mine of the same company. Then more than a thousand workers were locked up for more than 24 hours. They could be saved.