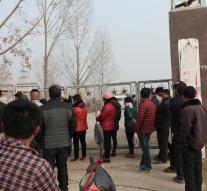 - Rescuers in China are working to rescue eighteen people from a collapsed mine in the northeast of the country. By unknown cause collapsed gypsum mine in Shandong province Friday.

At that time there were 29 people working. Eleven people were rescued, according to the Chinese news agency Xinhua. Rescuers have located the eighteen other miners in two places in the mine. The rescue work is difficult because the mine is not yet stable.