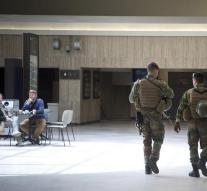 brussels - The threat of terrorism in Brussels is now also noticeable in the household budget for the EU. Next year will be 61.8 million euros earmarked for the security of the EU institutions is evident from the draft budget presented to the European Commission on Thursday to the European Parliament.

The European Commission and the building where the EU ministers gather the political leaders, are right next to the metro station where a suicide bomber on March 22 gave a bloodbath. Then the security measures were tightened significantly, and is already 16 million set aside for this year.

Further proposes to reserve the commission for 5.2 billion euros for the surveillance of external borders and management of the refugee crisis. That's 100 million more than this year. For growth and jobs, the EU draws anymore.