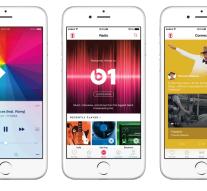 Cook was speaking at a technology conference in California's Laguna Beach. In addition to the 6.5 million paying customers, there are a further 8.5 million who use the free trial. This gives service 15 million users. " A successful debut ", according to the CEO.

Apple Music is a combination of music player and iTunes streaming service Music Beats, a result of the acquisition of Beats Electronics last year. The service was launched in June.