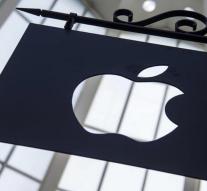 - Apple's new hardware boss Johny Srouji came with his appointment for nearly $ 10 million of shares. This is evident, according to MacRumors out documents from the US Securities and Exchange Commission that are now released.


Srouji is on December 17 is shifted to the position of Senior Vice President of Hardware Technologies.
On the same day the iPhone maker also announced other senior Apple executives also got another function.
Thus Phill Schiller App Store gotten under his wing and Jeff Williams is promoted to operations director (COO), the function chief executive (CEO) Tim Cook held until the resignation of the late Apple CEO Steve Jobs.
Srouji has since 2008 employed by Apple. He then brought in to develop the A4 processor for the iPhone 4. Previously, he worked at IBM.
NEW