Home / World / Million worth of jewelery stolen at Elysée 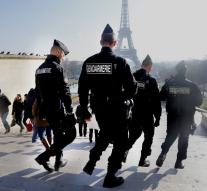 - Nearly a million euros worth of jewelery was stolen Friday from a shop right next to the French presidential palace, the Elysée in Paris.

Friday morning the store was robbed by an armed man, reports the newspaper Le Parisien. It is not known if the weapon was real, but the sight was enough for the robber without violence to run off with the loot let go.