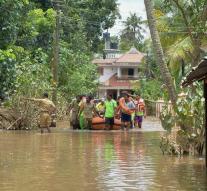 delhi - The worst flooding in a hundred years continues to plague the South Indian state of Kerala. Between 800,000 and 1 million people are now internally displaced and housed in emergency shelters, announced the Minister of Agriculture of Kerala Sunil Kumar. The death toll has risen to more than 350.

More than 100,000 people have been cut off by the water masses. According to the minister, the government tries to bring drinking water, food and medicines to them via the air.

With the slowly decreasing rainfall, it is now important to take care of the survivors and get the situation under control. Tens of thousands are still waiting for help on roofs. In the region, which is also popular with tourists, more than forty rivers have left their banks, eighty dams have broken and many bridges have collapsed. In many places there are no telephone connections and no more electricity and there is a risk of epidemics. Contact with remote areas is difficult, the crisis team reported.

Since 8 August, the inhabitants of Kerala have been fighting against the bodies of water. They are used to heavy rainfall during the monsoon season, but this year they are unusually heavy.