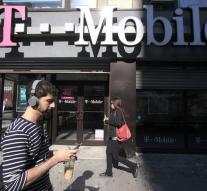 - T-Mobile USA have in the United States to pay a fine of $ 48 million (44 million euros) for misleading advertising. This made the US regulator FCC Wednesday.

The Deutsche Telekom subsidiary provides customers with certain contracts have promised an unlimited amount of data. However, the fine print of the contract was that customers had consumed a certain amount of data, then it had to do with a much slower internet connection.

According to the FCC, it is incorrect that such limitations are included in data plans.

The money that T-Mobile USA has to pay is used inter alia to compensate aggrieved customers.