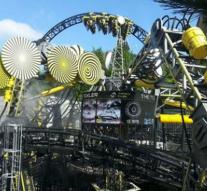 stafford - Because two carts in a British coaster collided hard against each other last year, the owner must pay a fine of 5 million pounds. Which is converted nearly 5.8 million. The collision sixteen people were injured. Two teenage girls lost a leg.

A court sentenced the company Merlin, owner of Alton Towers, Tuesday. According to the court it was fortunate that there are cases, no deaths.

The company said at the trial that his staff had made a mistake. One of the carts had stopped during a round on the roller coaster The Smiler. As a precaution the computer placed immediately shut the whole attraction. The servants assumed that there was a computer glitch and switched the safety off. The other carts were driving again, after which the collision occurred.

Alton Towers is located north of Birmingham. The park attracts about 2 million visitors annually. The Smiler, opened in 2013, has fourteen so-called loops and corkscrews, a world record.