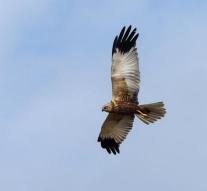 basel - A 45-year-old Swiss collector has done damage to millions of euros in museums in Switzerland, Germany and Austria by stealing feathers of prepared birds of prey. He has now been arrested and charged for theft.

The man stole in museums in eight cities of 167 species of birds of prey. Justice in Switzerland estimates the damage amounting to around 5.5 million euros. The scientific loss, however, is 'immeasurable'. There are no more undamaged preparations for some bird species.

The man wanted to set up a collection of all birds of prey in the world.