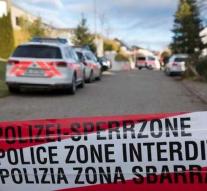 lausanne - Calculating criminals have captured millions in the Swiss-French border area with a carefully planned action, a combination of hostage and robbery. They forced the driver of a cash car to stop by telephone near Chavornay, north of Lausanne. The man cooperated because his daughter, who is studying in Lyon, had been kidnapped. In the parking lot where he braked, three armed men were ready.

The canton Waadt police confirmed Friday in the Swiss media that the 22-year-old woman had been released after the armored van with her father had been emptied behind the wheel. The perpetrators, dressed in black and masked according to the Blick newspaper, took off in a dark Porsche SUV. They are without trace.

How much money has been stolen has not been disclosed. French news stations reported that it is an amount between 15 and 30 million Swiss francs (13 to 26 million euros). The robbers spoke French with a North African accent. The hostage-takers, who pretended to be plumbers when they called the victim, put her on the street in Tramoyes, 30 kilometers from her home town.