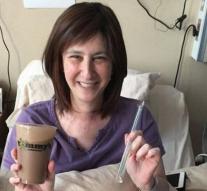 - A restaurant from the state of Ohio has made every effort to deliver a milkshake to a dying woman in Washington D.C. 'I was not sure if it was going to be successful,' said Tommy Fello's owner of Tommy's restaurant. 'But we were determined to find a way to deliver the milkshake.'

The 50 year old Emily Pomeranz had cancer and had only one wish: a mocha milkshake from her hometown. That she told her friend Sam Klein, who contacted Tommy's restaurant to get it done.

'After a few days, a phone call from owner Tommy was received and he said he would make it possible,' Klein said in a Facebook post. Fello told Fox 8 local news channel that he had never had an order of this size in the 47-year history of his restaurant.

With the help of a lot of ice cream and an extra fast delivery worth about a hundred euros, it managed to deliver the milkshake 600 kilometers away. According to friend Sam, she was fond of tasting her favorite milkshake again.

Last Friday, Emily died. Four days in advance she got her milkshake.