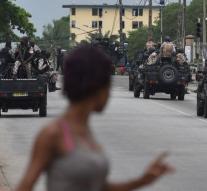 abidjan - The Côte d'Ivoire army is in Bouaké doing an operation to restore the 'order' after three days of mice. That said the army's army, General Sekou Touré, said on Sunday. The turmoil arose because of the payment of bonuses.

'These very serious acts are in line with the defense mission that the army has,' said General Touré. 'As a result, a military operation is under way to restore the order. '