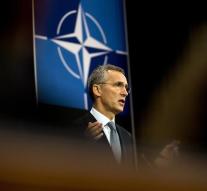 berlin - Secretary General Jens Stoltenberg NATO has defended the lack of military intervention in Syria. He said in Bild am Sonntag that military actions by NATO countries in Syria just would have led to a further escalation of the conflict.

'We thus take the risk that the conflict will be. Or that more innocent people die. Sometimes the consequences of military intervention exceeds the yield, 'said Stoltenberg.

NATO partners, according to Stoltenberg come together to the conclusion that 'the use of military means only, but would have made the terrible terrible conflict. '