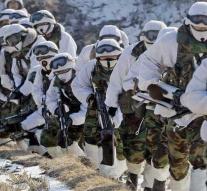 seoul - South Korea and the United States held a joint military exercise in early April that had been postponed due to the Olympic Games and the Paralympic Games. That's what a security advisor from the South Korean president told Yonhap news agency.

'The exercises will start in the first week of April,' said Moon Chung-in during a seminar in Washington. 'If there are talks between the US and North Korea before the exercises begin, a compromise on those exercises could be concluded. '

South Korea and the US usually hold their joint exercises in March and April, involving approximately 17,000 US troops and more than 300,000 South Korean soldiers.