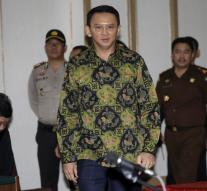 jakarta - Indonesian prosecutors have filed a one-year imprisonment sentence on Thursday for two years with the Christian governor of the capital Jakarta Basuki Tjahaja Purnama for blasphemy. The lawsuit is seen as a test for the religious tolerance of the country where Muslims are in the majority.

The process is about the statements made by Purnama, also known as Ahok, last year against his opponents. He would have spoken about the Quran in his political campaign for governance. Many Muslims and especially the radicals, offended their remarks and called for the resignation and prosecution of the governor. They did report and mass protests followed.

Purnama, the first ethnic Chinese and Christian leader in Jakarta, has always denied allegations of blasphemy. The judge will make a ruling in the coming weeks. Blasphemy is a maximum sentence of five years in Indonesia.

Wednesday there were elections in Jakarta for a new governor. It seems that the fifty-year-old Purnama strikes a defeat in his attempt to remain governor. According to unofficial counts, he must recognize his multiple in his Islamic opponent Anies Baswedan.

Indonesia is one of the largest democracies in the world with 250 million inhabitants. More than 200 million Indonesians are Muslims. Christianity is in the Southeast Asian island empire with about 20 million believers in the minority.