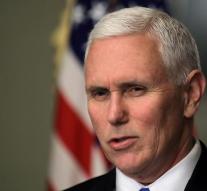 Pence remains three days. According to US media he comes to reassure Europe. Earlier, President Trump negative statements about the importance of NATO and the EU.