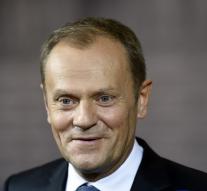 brussels - The European Union and Turkey have made ​​a pact to stop illegal migration to Europe to a halt. That made EU Minister Donald Tusk announced Sunday after consultation.

In exchange for " first " 3 billion euros European money, Turkey must improve the reception of Syrian refugees in camps in Turkey and the border guard to Europe much better. It is to prevent that large numbers of refugees to cross over to Europe, via Greece and the Balkans. The accession talks between Turkey and the EU should be accelerated.