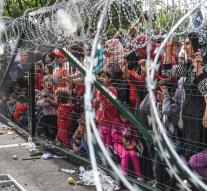 brussels - European leaders and heads of state come again Thursday and Friday in Brussels. The main topic is manageable with the refugee crisis. They also discuss the requirements Britons set to remain within the European Union.

\x26amp; quot; Our goal is clear: we must regain control of our borders to stem the flow of refugees and Schengen to maintain \x26amp; quot ;, wrote Union Minister Donald Tusk in his invitation letter to the leaders.

Among other plans for a European coastguard and border and the tightening of controls by EU citizens when they enter or leave the EU on the full agenda. Expected to decide the countries to examine these proposals rapidly.

About the 'Brexit' referendum will have to indicate the British Prime Minister David Cameron if he still retains the requirement to other EU citizens to refuse four years of social services.

Themes such as counter-terrorism and the internal market are discussed.