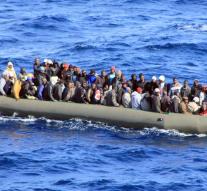 rome - The number of boat refugees managed to reach the Italian coast from North Africa beats all the record two years ago now. The Italian authorities have already counted 171 299 migrants on November 28 for this year. About were quite a record year in 2014 there 170,100.

In three years since 2014 almost half a million people from North Africa drawn to Italy in the hope of a better life. Currently, there live 176 000 asylum seekers in reception centers. The number of asylum applications this year is also a new record.

The number of children who risk the trip to the European coast unaccompanied, is that according to Italian statistics too. It is so far to 23. 000 minors. The previous record was in 2014 13. 000 minors.

It is not known how many people to reach out to the attempt, often living in the desert and the Mediterranean Sea, the EU. It would certainly this year 4,600 people go.

Rome sees in the new record as a result of the refugee agreement between the EU and Turkey. Which was concluded in March to stop the chaotic journey of migrants to Greek islands and Greece and block the Balkans for the often forced emigrants.