Home / World / Migrants in revolt at border of Macedonia 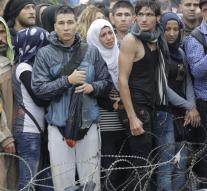 - In the northern Greek border town Idomeni Friday chaos incurred when migrants from Morocco, Pakistan and Iran rebelled against the policy of Macedonia border. That leaves only Syrians, Afghans and Iraqis by.

Around 1,500 refugees refused Friday by train to be brought to Athens. They started riots against the Greek police and threw stones towards refugees that the border could be over.

The atmosphere at the Greek- Macedonian border has been tense days. Thursday 6000 people were waiting for the opportunity to travel further north.

Under pressure from other EU countries voted in Greece with the deployment of European Border Guard Frontex. Who will be assisting with the registration of refugees in the country.