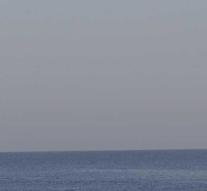 istanbul - At least five people were killed when a boat with migrants sank off the coast of Turkey. Three of the dead are children, says the Turkish Coast Guard.

The vessel was lost at the western province of Izmir. Two survivors then swam to the mainland and made an alarm. Three other people were taken out of the sea with the help of fishermen, the authorities say. They search with a helicopter and boats to other drowning people.

The death toll may still rise. In total, according to survivors, fifteen people were on board, fourteen Afghans and one Iranian.