Home / World / Migrants and dogs brought to land in Malta 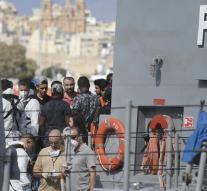 valletta - A naval ship brought 58 migrants and a dog to Malta in Malta. The migrants were picked up from the sea over a week ago by the rescue ship Aquarius off the Libyan coast.

The 58 were on two small boats. It concerns Libyans, Palestinians, Syrians, Somalis and Pakistanis. Among them are seven families with three children under five years. And a small, white dog that brought a Libyan family. The animal is first placed in quarantine and examined before it is returned to the family.