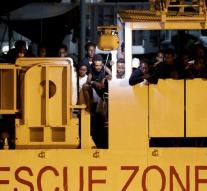 geneva - The African migrants who had to stay on board a ship in the port of Catania for over a week were detained in Libya for two years by smugglers. They were beaten, tortured and raped there before they made the crossing to Europe, reports the International Organization for Migration of the United Nations.

Employees have taken statements from the migrants. They were all undernourished and said they were being held against their will in Libya, says spokesman Joel Millman. Many said they were 'beaten and tortured by traffickers who wanted ransom of their families in their homeland'.

Millman also said that most women told Italian doctors that they were raped in Libya. According to him, thousands of people are still being held in Libya.

The migrants were allowed to leave the ship on Sunday when the Vatican, Ireland and Albania offered to take over.