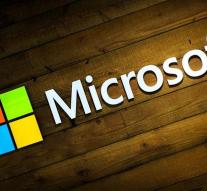 - Microsoft has announced that it will send alerts to users when it is suspected that the government has tried to hack their account.


The company was recently discredited after it had decided earlier victims of hackers in China not to inform. In 2011, Chinese authorities would hack into the email accounts of leaders of Tibet and the Uighurs have tried. The victims who used Hotmail had no clue about this, however.
Microsoft follows the new policy companies like Facebook, Twitter and Yahoo earlier also introduced such a warning system in order to better guarantee the privacy of their users. We have decided to let people know that there is sufficient evidence hackers backed by government , Microsoft wrote in a blog. We do that because it is more likely that such attacks are more sophisticated and longer-lasting than other cybercriminals.
NEW