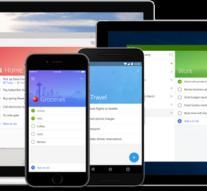 redmond - Microsoft released a first public version of the To-Do app on Wednesday. This app should eventually replace the Wunderlist purchased by the software giant in 2015.

The Wunderlist substitute needs to make the task easier with a smart algorithm. To-Do also has a far-reaching integration with Office 365. The tasks from Outlook can then run into the app. In the coming months, more Microsoft services need to work with To-Do. Also in Wunderlist, popular things like shared lists in To-Do should be included.

The '' preview '' version of To-Do is for iPhones, Android phones, Windows 10 and as web service. It is intended that an iPad version, an Android tablet variant, and a macOS version will appear soon.

Wunderlist users do not have to transfer directly. An import tool has already been created that transfers your tasks from Wunderlist to To-Do.