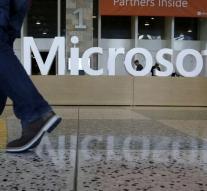 redmond - One of the most famous Windows programs used to get a new look. Microsoft will make a new version of Paint. It is an app for Windows 10. Tech sites The Verge and TechRadar report that.

The new Paint should make it possible, inter alia in order to draw three-dimensional objects. According to The Verge, Microsoft is now engaged in alpha testing.

Microsoft later this month, an event where the new plan does explained. Possibly the revamped Paint is part of it.