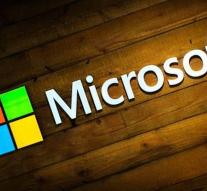 redmond - Microsoft has taken measures to protect computers against the ransomware attack earlier in the day in dozens of countries. That has told a company spokesman in a statement to Reuters press office.

'' Today, our employees have added detection and protection against new malicious software known as Ransom: Win32. WannaCrypt, 'said the spokesman in the statement. The company works with its clients to provide additional assistance.

Worldwide, Friday's computers are hit by ransomware, malicious software that encrypts files on computers and releases only for payment. The software focuses on corporate networks. Out of more than seventy countries there have been reports that the ransomware victims have made.

READ ALSO: Cyber ​​attack is also aimed at the Netherlands

The special thing about this ransomware is that active use is made of a leak in Microsoft's Windows operating system previously used by the US intelligence service NSA. The method of the NSA was shortly on the streets and is now being misused by criminals.

There is also a security update from Microsoft that seals the leak. However, there are organizations that have not yet installed the update.