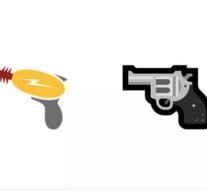 redmond - Apple recently changed the emoji of a gun in a water gun. Microsoft is doing exactly the opposite. The picture of a toy gun has turned into a real weapon. The old emoji did not fit well with the expectations of users, said a spokesman for Microsoft at Engadget.

The new emoji is part of the update of Windows 10, Microsoft this week began to circulate.

Apple announced its new pistol design this week. Coming this fall with 10 new iOS for iPhone and iPad.


Google, Samsung, LG, HTC, Facebook and Twitter have not changed. Their gun-emoji is still a picture of a real weapon.