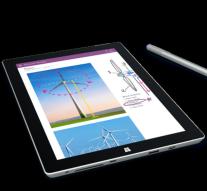 - After a popularity explosion after the introduction of the iPad, the tablet market began to shrink slowly. But Microsoft may seize the coming years, market share, according to market analysts Strategy Analytics.

Currently Google 's Android operating system has 68 percent of the tablet market, iOS and Windows 22 percent to 10 percent. According to the agency, Windows will in 2019 have a share of 18 percent. However, this will largely be at the expense of Android, which according to the forecast than 59 percent of state. The reason for the growth is that there are many inexpensive Windows tablets arrive, according to the bureau. It also predicts that Windows will do well with people who are seeking a hybrid between a laptop and a tablet. Finally, Strategy Analytics believes that the new iPad Pro before the end of the year will be one million units were sold.
NEW