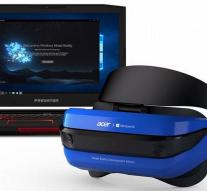 redmond - Microsoft will host an event surrounding Windows Mixed Reality on October 3rd. It is not yet clear what is going to happen in San Francisco, but according to The Verge there is no presentation of the new HoloLens.

However, the group will update the plans it has with Windows Mixed Reality. The first headsets with the system will be released on 17th of October, 14 days after the event. It was previously known that the headsets cost 400 euros and that is relatively cheap. That's one of the points Microsoft wants to distinguish.