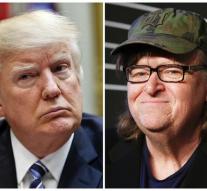 - Director Michael Moore is working on a movie about Donald Trump. The documentary will be awarded the title and will be presented at the Cannes Film Festival.

The title ends on the date that Trump was known to have won the presidential election, November 9, 2016. It is also a reference to Moore's earlier documentary about George W. Bush, Fahrenheit 9/11. That film, the most successful documentary of all time, he collaborated with producer Harvey Weinstein, who also cooperates again.

Moore has been secretly working on the documentary lately, announced Weinstein on Tuesday.

'It does not matter what we do, nothing works,' Moore said in a statement. 'Whatever is revealed, he stays. Facts, the reality, brain can not beat him. Even if he shot himself in his foot, he gets up again the next morning and continues with twittering. That will all stop this movie. '

Michael Moore became famous with his documentaries in which he addresses political and social issues. His movie Bowling For Columbine, about weapons in the US, won an Oscar in 2003. Fahrenheit 9/11, about the US response to the attacks of September 11, 2001, went to the Cannes Film Festival in 2004 with the Golden Palm.

Moore also recently announced that he is going to theaters with a show about Trump.