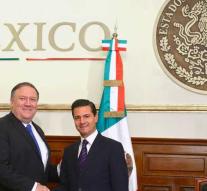 mexico city - The Mexican president Enrique Peña Nieto wants the US to reunite families who have been separated at the border as soon as possible. He said that Friday during a meeting with US Secretary of State Mike Pompeo.

The Mexican head of state thinks that a lasting solution should come with the welfare of the children as the main goal. The US was criticized worldwide for tightening the rules whereby children at the Mexico border were separated from their parents if they had entered the country illegally. The rule has now been reversed but not all children are back with their parents.

It was Pompeo's first visit to Mexico. Both countries are at odds because President Donald Trump wants to put a wall on the border to keep migrants out.