Home / World / Mexico Plan of Action for compatriots in US 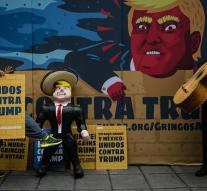 - Donald Trump election victory for the Mexican government reason to draw up an action plan with eleven points for compatriots in the US Mexico activates include a phone number that Mexicans in the United States, call free.

Through that song and the Mexicans can make contact a new app with their government and ask for help if problems arise, the Mexican newspaper El Universal reported Wednesday. The government will extend the opening hours in the fifty consulates in the US and strengthen contacts with local and regional authorities in the US.

Many Mexicans fear the consequences of the presidency of Trump. In his election campaign, Trump announced that he will make many Mexicans from the USA and want to close the border with a wall. He also Mexicans and Mexico repeatedly rudely insulted. It has a population estimated at nearly twelve million Mexicans legally in the United States. In addition, there are 5.5 million Mexicans living illegally in the country.