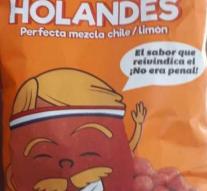 mexico city - Football crazy Mexicans eat the last bits of frustration away about the loss four years ago against the Dutch national team at the World Championship in Brazil.

A salt producer in the North American country brought a bag of peanuts on the market under the name 'Holandés' with in big black letters: 'The taste that confirms again that it was not a penalty. 'It's a mixture of lime and hot chili's.

The Netherlands won the game in the eighth final with 2-1 after a late penalty was used by Klaas Jan Huntelaar. The offense against Arjen Robben has always been seen as the ultimate diving dive throughout Mexico. 'No era penal' (it was not a penalty) dominated the social media for months.

On the website of producer Circle K is an explanation of the 'Dutch' nuts: 'This peanut grew up between the tulips, always practicing diving,' the salt manufacturer jokes. The maker promises that a few bites will make the nasty aftertaste of the previous World Cup forget.

On Monday, the Mexican team will play again in the eighth finals. Then Brazil is the opponent.