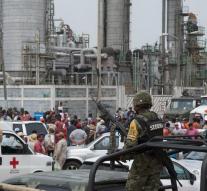 According to CEO Jose Antonio Gonzalez Anaya is the cause of the
explosion is not yet known:,, We know that there was a leak, but we know not the cause, though everything points to an accident. '' He denied that the explosion has to do with the economic problems of the company, which is suffering from the cheap oil. Pemex previously announced that the disaster does not affect the export of oil.

It is not the first time that Pemex has been hit by such a disaster. As dozens of people were still in 2013 died in a gas explosion at the headquarters in Mexico City.